This article was written by Sudeepti Kuppa, Ph.D. for the September issue of the National Science Policy Network newsletter. It was edited and adapted for the Vanderbilt Science Policy Group Blog by Amrita Banerjee, Ph.D. 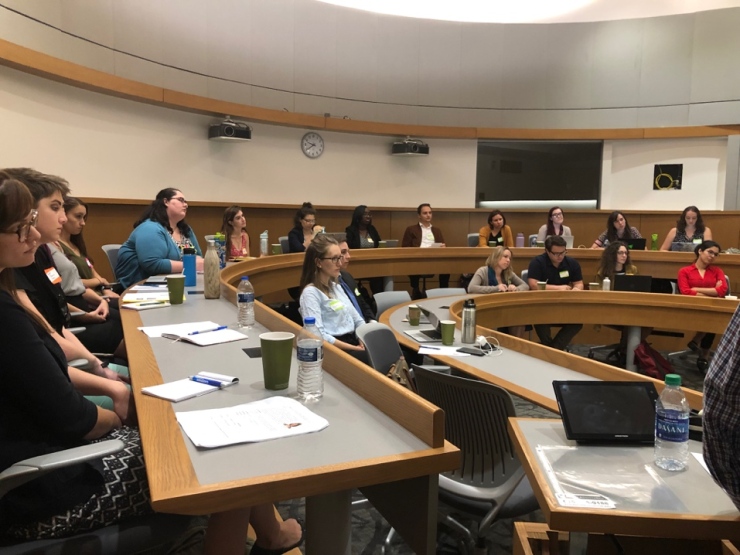 When myself, Sudeepti Kuppa, and my co-Director of the Southern Hub, Amrita Banerjee, assumed our leadership positions in mid-2018, one of our visions was to bring together members of all our constituent science policy groups for a day-long retreat. We were truly passionate about establishing in-person relationships with our regional members, and thought it would be incredibly impactful to get everyone under the same roof to collaborate and support each other in their local endeavors as well.

After applying for the NSPN Microgrant twice, we were finally funded a generous amount by the national leadership and evaluation committee to put our vision in action. A quick 6-month planning turnaround later, we hosted our well-attended retreat on Saturday, September 14th in Nashville, TN at the Wond’ry Innovation Center on Vanderbilt University’s campus.

The day began with a panel of speakers hailing from various background, but all sharing a passion for policy. Juliana Ospina Cano (far left) currently serves as the Executive Director of Conexión Américas but spent a chunk of her career in DC serving as the Associate Director of Education for UnidosUS, a national Latino advocacy and civil rights organization. She currently works to ensure that local bills and resolutions are supportive and positively impact Latino families. Chris Burger (second from left), our second panelist, serves as the Special Assistant to the Commissioner and Director of the Office of External Affairs at the Tennessee Department of Health and therefore had incredible insight into health policy specifically, stating that one doesn’t have to “compromise who [they] are to engage in [tough] conversations [with public officials] to find middle-ground” and emphasized the power of investing in policy relationships. Michele Johnson (second from right), the co-founder and current Executive Director of Tennessee Justice Center, is passionately driven by a personal experience to ensure that families struck by illness, disability and consequently financial trouble, have a support system to overcome their struggles. And last, but not least, Steve Brophy (far right) currently fulfills the role of Vice-president of Government and Public Relations at Dollar General, but has worked for two senators in Washington, D.C. in addition to being former Chief of Staff to Marsha Blackburn, the junior Senator from Tennessee.

The morning panel was followed by a half-day “Use Your Voice” communications workshop led by Dr. Abby Olena, Ph.D., who previously received a degree in the life sciences from Vanderbilt University and also completed a postdoctoral fellow at Duke University before transitioning into science communications following an internship through AAAS at the Chicago Tribune. At this three-part workshop, retreat attendees learned about the importance of science communication and how to effectively engage a wide array of audiences, and also brainstormed and wrote a short policy memo individually on a topic of their interest. This interactive workshop not only allowed the participants to leave at the end of the day with a thorough, peer-edited memo, but also included a brief from Dr. Olena on how to market your writing on social media. Working in small groups, individuals were able to practice their elevator pitch and also create social media content that could accompany their published memo.

Following the successful communications workshop, attendees ended their day with our keynote speaker, Ted Townsend. Ted serves as the University of Memphis Chief Economic Development and Government Relations Officer since 2018 where he is also part of the President’s Council. Along with his academic role, Ted serves as the Chairman of Life Science Tennessee, a biotechnology advocacy organization helping support and grow the life science industry in Tennessee. His passion for engaging students in governmental activities has led to him developing programs whereby students can be exposed to internship and workshop opportunities related to policy and create a push for civic engagement.

Using funding from the NSPN microgrant and VSPG, we were able to cover participant housing and meals in addition to logistically positioning the accommodations close to the airport and event space. Given our attendance this weekend and the enthusiasm from our participants, we hope that the regional retreat concept is picked up by other Hubs within NSPN to allow for more engaging policy conversations and collaborations within constituent groups that further not only NSPN’s mission, but also encourages groups to work together and present themselves as an unified advocate for science policy as a whole.